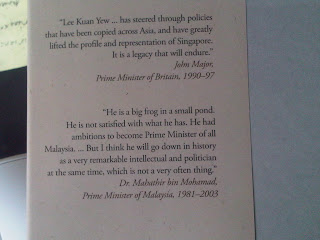 HAVE you ever bought something on the sheer strength of the product's marketing gimmick?

I think I might just have. I purchased a copy of Tom Plate's "Conversations with Lee Kuan Yew" 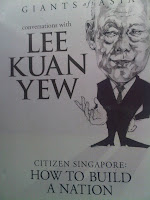 "He is a big frog in a small pond. He is not satisfied with what he has. He had ambitions to become Prime Minister of all Malaysia .... But I think he will go down in history as a very remarkable intellectual and politician at the same time, which is not a very often thing."

Half an hour into the book, I realise that I might have bought the book half-expecting Dr M himself may have contributed a chapter, if only to indulge in calling Kuan Yew names or for him to admit that Lee Kuan Yew was indeed too clever for the Malayan politicians back then, etc.

Fortunately for me, the book has been a fairly good read so far, even though there has been no reference to Lee as a frog or a pond. You can hardly go wrong with Lee Kuan Yew, can you?

Datuk Zaid Ibrahim, the former de facto Law Minister and an Umno strongman when Tun Abdullah Ahmad Badawi was Prime Minister, may not be so fortunate.

In June last year, he bought the idea that PKR was a political party that was different from Umno, the party he had quit in 2008 following a fallout with the leadership.

Now, just weeks ahead of party elections, he issued a Press statement that suggests that he is a man disillusioned with what PKR stands for.

Zaid is offering to run for the No 2 post in PKR, the party led by former Deputy Prime Minister Datuk Seri Anwar Ibrahim. When Anwar was Umno's deputy president and heir apparent to Dr Mahathir until his arrest in 1998, Zaid was nowhere near the top layers of Umno nor the government.

Zaid may be sincere or it could just be a clever political gimmick, but whoever wins the deputy president post of PKR could be Prime Minister one day. That's a fact.

If Pakatan Rakyat, the BN-like alliance consisting of PKR, DAP and PAS, wins the next general election, Anwar - not Lim Kit Siang of DAP nor Nik Aziz of PAS - would become Prime Minister and the deputy president of PKR would be in the running to become the deputy prime minister or one of the two or three DPMs (PR leaders have hinted that there will be more than one DPM if it rules).

His dream of an Anwar-Zaid tag team - and possibly his dream to become PM one day - is not enthusiastically shared by many in PKR, certainly not by those who are loyal to Azmin Ali, Anwar's long-suffering aide.

These people are bent on stopping Zaid from trying to deny Azmin a place beside Anwar. Zaid's Press statement was issued with these little king makers in mind.

Zaid clearly felt that this was not what he had signed up for.

"It's strange that they would react and behave this way. When I was accepted into the party a year ago, I was hailed as a hero and someone who is principled and brave, a political champion who did not care for position and status. Now, 12 months later, I have suddenly become a disloyal person, a shit-stirrer and someone who will sell the party to Umno. The personal attacks against me have been heightened. These remind me of the character assassination against me at the Hulu Selangor by-election, only then it was Umno which was whipping me."

Indeed, Zaid had been hailed by no less than Anwar himself as a coup for PKR and Pakatan. He had told a Press conference on June 13 last year to welcome the former Umno man into PKR: "(Zaid) is known for his bravery in defending human rights and the independence of the judiciary."

What changed? Did Anwar over-estimate the worth of Zaid in PKR and Pakatan, or did Zaid lose his lustre after his defeat to BN newbie P. Kamalanathan at the Hulu Selangor by-election last April?

Or did Zaid fall for a PKR gimmick when he decided to gamble his political future with past political enemies like Anwar, Azmin, Kit Siang and the others?

Zaid cannot afford another defeat so soon after Hulu Selangor, so there's always a possibility that Anwar would offer a face-saving solution.

Many doubt that Zaid would accept a compromise, though.

Because, while he's no Lee Kuan Yew, Zaid is a big frog in the pond.

Only, he may not go down in history as remarkably.

Posted by Ahirudin Attan at 5:04 PM