Have the 4th Estate failed themselves?

What a BUMmer! One major theme of last Saturday's B.U.M. 2009, dubbed the most important blogging event in Malaysia this year, was on the 4th Estate, or rather the question: Have the 4th Estate Failed Us?

Ahmad A. Talib, the man a certain online news portal with Italian connection said Najib Razak did not want back at NSTP, asked: "Have (the 4th Estate) failed themselves?".
Go to his blog here for his pictures from BUM and his thoughts on the matter.

In my brief presentation as the last panel member of the last panel discussion, I said that during the last three years the MSM failed the citizens. There were the occasional exceptions here and there but the mainstream newspapers and television stations were generally behaving like lapdogs instead of watchdogs during that period. I cited their failures to pursue, let alone uncover, the controversies and misdeeds that the online news and blogs were exposing. I failure was man-made. I blamed it on some editors.
But having said that, I also reported to the Bummers that day that the online news portals and bloggers are also failing us pretty quickly.

Maverick SM waited for the next day to see how the mainstream media reported on what Dr M had said at BUM 2009. "That was not the essence of Tun M's speech," he blogs here, with a news cutting as proof of how - or why - the MSM are still failing.

A Voice, who identity was exposed recently by a politician-blogger bent on doing more such exposes, enjoyed the whole day affair. In his posting, he wrote:

"Sorry folks, if you were expecting a brawl with blood all over the premise it didn't happen. In fact, they were so cordial and friendly and even exchanging handphone numbers. Perhaps they would stop leaving nasty comments on each others' blog after this since they personally know each other now." 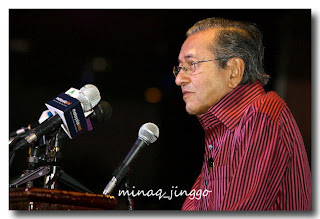 Amir Hafizi has a toe-sucking - or, rather, toe-tickling - take here on the Q and A with Dr Mahathir Mohamad and Bummers (except he kept calling us Bums). Shamsul Yunus did it "live" here. And Big Dog has a posting "Bloggers are VIPs", plus pictures, here.

Jinggo has lots of pictures, here.

Posted by Ahirudin Attan at 1:12 AM